Hybrids in collaboration with Envisions

Our physical surroundings are increasingly melting together with the digital world. To a growing extent, materials and objects are experienced through photographic representations on digital screens. 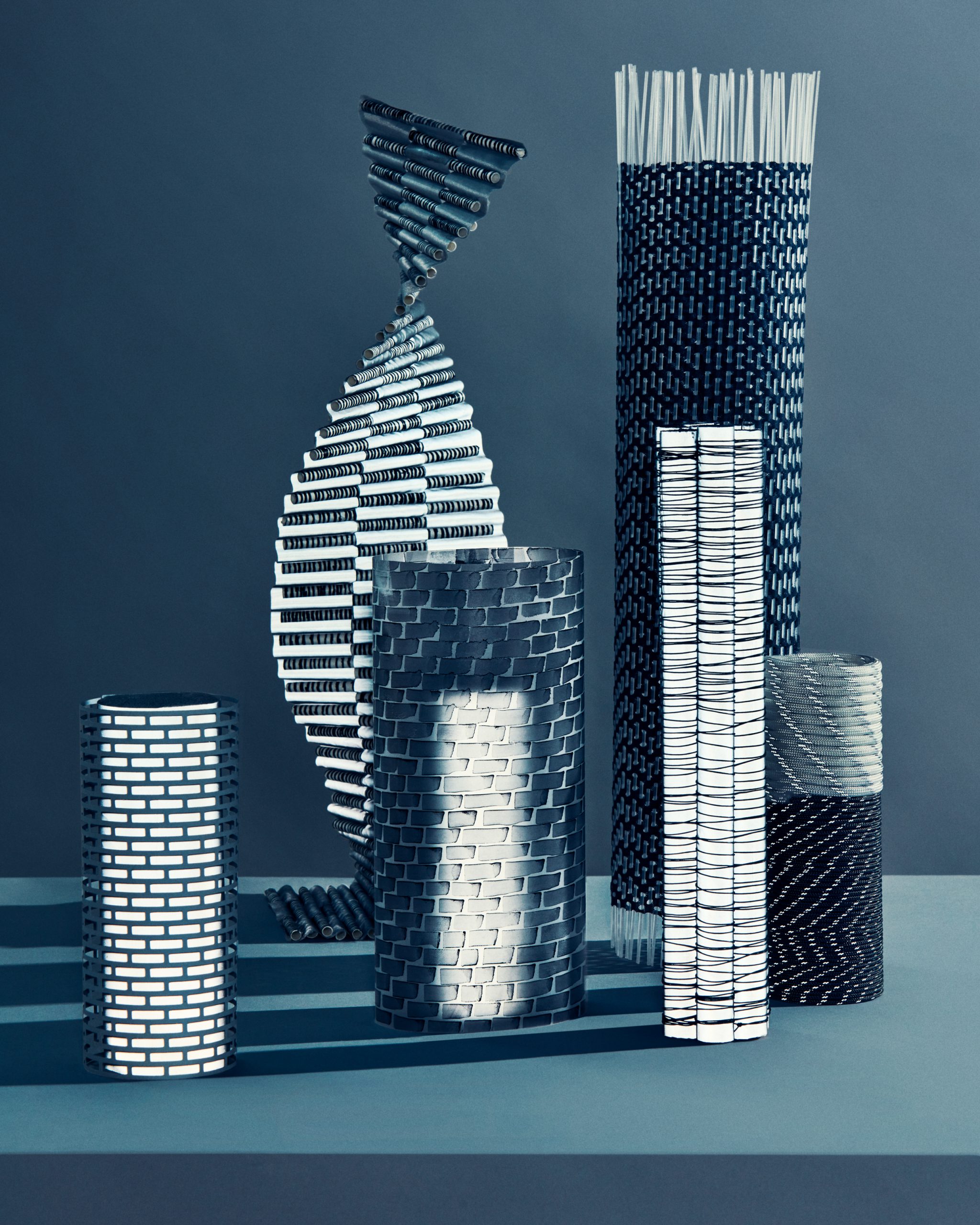 Another textile that touches the borders of the digital realm is Front 44, a Graphic Woven upholstery fabric by de Ploeg. The duotone colour palette of the base layer creates a graphic grid while the material’s texture forms a similar surface texture. The overlay of two grids through different techniques creates an interesting pixelated tension that’s slightly reminiscent of digital displays. On the other hand, dazzling optical patterns can be discovered in the Java conductive knitted fabric from Grupo Morón. The use of carbon creates a conductive material that’s extremely resistant, lightweight and breathable. The cube-like graphics give a sense of depth to the flat structure while enhancing the materials performative appearance.

When moving away from textiles into the territory of static materials, hybrid qualities are featured in the translucent Cement of Lucem. Embedded glass fibres transmit light through the concrete to create an illuminating effect. The natural stone and luminescent dots create a fascinating interplay between earthly and digital aesthetics. Natural looks can also be found in the Shell Homage Plastics by Rania Elkalla which are based on natural fillers such as eggs and nutshells. The fully biodegradable materials combine the look of plastic with an earthly touch.

Computer-generated images have become so refined that we no longer question whether they can compete with their physical counterparts: The digital and the physical have become indistinguishable. In response to this evolution, the material industry starts to prioritise a material’s digital performance over its physical experience. How well a material displays on a screen has become as important as how it tickles our senses in real life. But ultimately this isn’t a competition, the digital and the physical realm are no longer separate worlds but intertwined into a hybrid whole.

Exemplary are the Laminated metal veneers from Homapal where thinly rolled metal foil is applied to a laminate base. This process allows us to provide the surface with various textures through an embossing process. their Lava texture stands out because of its melting aesthetics that seem to be altered with digital tools while the Crushed texture features a more subtle take on the same look.

Three-dimensional aesthetics in flat surfaces can also be found in the Create-Fabrico profiled yarn flooring from Bolon. The grey and blue coloured yarns create a vivid whole that shifts with changing light conditions and the user’s position. The design provides a reinventive touch to an otherwise static material category. Similar features can be discovered in their Ethnic-Kaise flooring fabric that reflects light by using silver threads. In combination with alternating grey threads, the material has a futuristic yet natural shimmer that plays with light. A similar yet unfamiliar silvery look can be found in the Synthetic Leather Metallic material from ATN. Combining the recognisable texture of leather with the finishing of metal, it’s a versatile material partner for diverse applications. 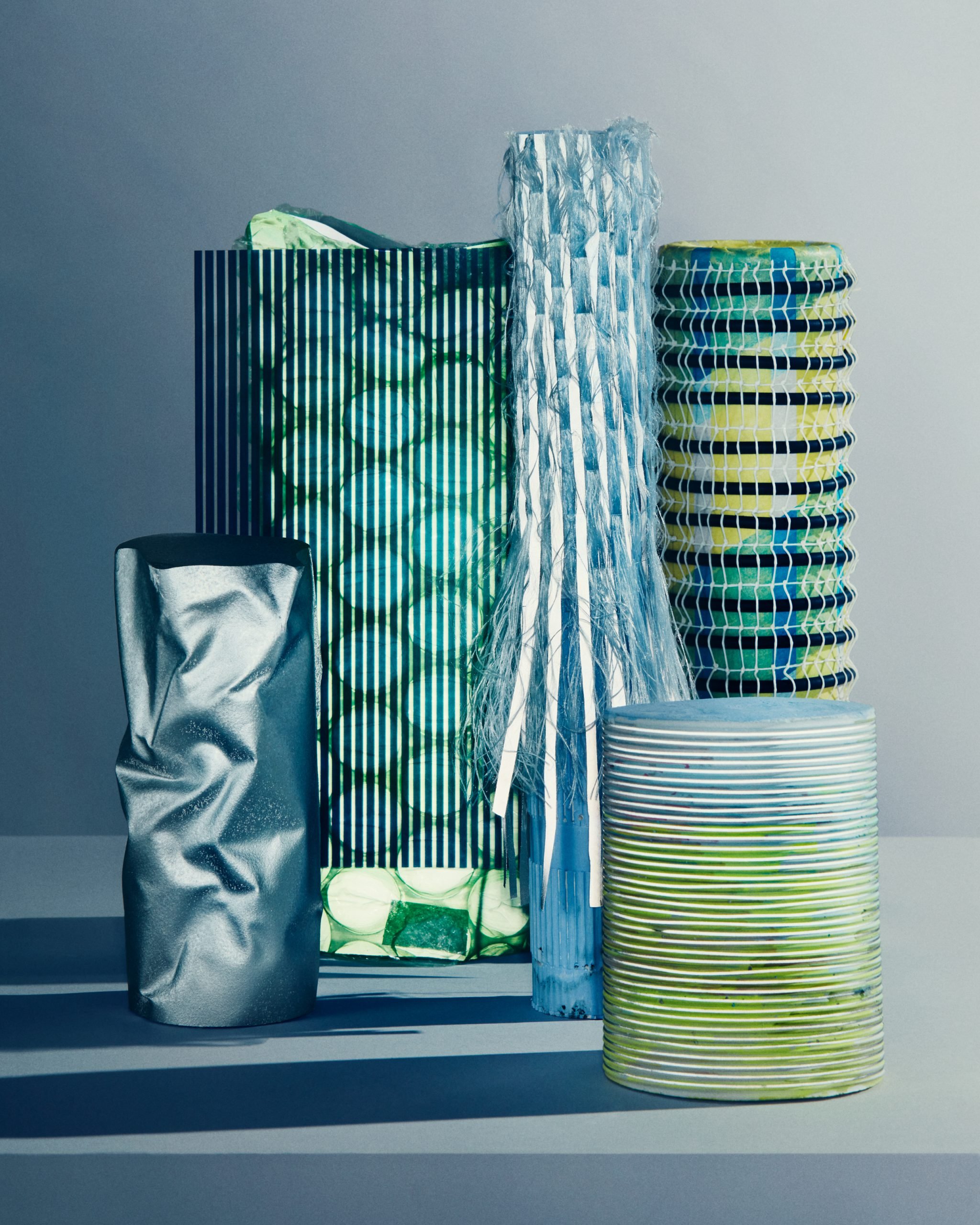 Equally terrestrial looks are featured in the Antique Mirror Sheets by Antique Mirror. Reminiscent of aged mirrors, the glass sheets feature incorporated colour reflexes that combine familiar looks with unexpected techniques and effects. The Eijffinger Venue holographic foil is a more illusory combination of old craftsmanship with innovative technologies. Its kaleidoscopic effect changes constantly in varying light conditions and can be applied as a veneer to various materials.

Altogether, these materials paint a picture of a material landscape that’s venturing into the digital realm. Although their digital performance becomes increasingly important, it’s the interplay between recognisable and unfamiliar elements that truly sparks wonder. We can best describe this new material chapter as hybrids that feel at home in both worlds, whether that’s a screen or a physical space.